The 3rd summit inter-Korea happened from the 18th of September until the 20th of September.  The South Korea President Moon Jae-In met with the North Korea leader Kim Jung-Un at Pyongyang, the capital city of North Korea. During this 3-day meeting, they discussed the denuclearization of North Korea. The objective of Moon Jae-In is to ease the dialogue between North Korea and the US. During this summit, they took several decisions: the shutting down of a missile site, less tensions between the North and the South, link the two Koreas by train, a joint application for the 2020 Olympic Games and welcoming them together in 2032. Last but not least to reunite families that were separated after the war. Apparently, Kim Jung-Un will soon go to Seoul for an official visit.

USA and China: a trade war

During its election campaign, Donald Trump promised to make the trade fairer to the US. His goal is to stop the “unfair transfers of American technology and intellectual property to China” and protect the jobs of US citizens. In the last 6 months, he declared war on China by raising taxes on their imported products. The taxes are $250bn worth of goods. Although, products from Canada and Mexico are also victims of this new policy, China is the one that retaliated the most. They decided to create a tax of $60bn on the American imported products. According to Jack Ma, founder of Alibaba, this trade war could become a military conflict: “When trade stops, peace stops”. Last week, two Chinese and American destroyers almost collided in China Sea.

On the 5th of October, Denis Mukwege and Nadia Murad both received the Nobel Peace Prize. The former was rewarded for his work on reconstructive surgery on women who have been raped. The Congolese gynecologist is known as “Doctor Miracle”. Twenty years ago, he started to heal these women in the Panzi Hospital in Bukavu in Democratic Republic of Congo.  Today, he treated tens of thousands of victims.  The latter, Nadia Murad, the Iraqi Yazidi, was sold into sex slavery by Isis. She is now a strong advocate for the defense of human rights. The committee said: “They have both put their own personal security at risk by courageously combatting war crimes and securing justice for victims. They had both helped to give greater visibility to war-time sexual violence”.

Two years ago, Israeli police started an investigation on the potential implication of the Prime Minister, Benjamin Netanyahu, in several corruption cases. He was questioned for the 12th time a few days ago. Protestors are now standing right in front of the house of the Prime Minister with banner “crime minister”. He is accused of corruption, fraud and breach of trust. There are two corruption cases: the first one is about accepting gifts from billionaires and agreeing to give them financial advantages. The second one involves Benjamin Netanyahu paying the owner of Yediot Aharonot, biggest daily paper of the country, to have a positive image in the media. His wife is also accused of fraud and corruption. She spent almost $100.000 on meals with the taxpayers’ expenses. The Prime Minister denies all the accusations and criticizes a witch hunt he is victim of.

The first days of September were quite hectic. In fact, Russia shook the world by mobilizing not less than 300,000 troops in a show of force in Siberia. It is seen as Russia’s “largest military exercise since the Cold War.”  This 5-day drill was organized co-jointly with the Chinese and Mongolian army, as the Independent claims. Alexander Gabuev, expert at the Carnegie Institute (located in Moscow), asserts that this high-scale operation coveys a powerful message to Russia’s neighbors: they are not enemies but allies. Moreover, this strong message aims to prevent the Western World to pressure Russia in its international affairs. However, Moscow contends that “the maneuvers are not directed against other countries and are in line with our military doctrine, which is defensive in character” as Russia’s chief general staff Valery Gerasimov says.

From civil war to region-wide crisis 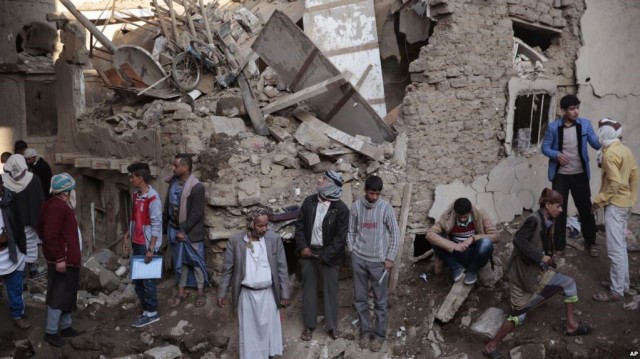 The old-established Yemeni civil war is turning into a larger (and more complex) crisis in the Middle-East. In fact, the conflict has evolved into a direct and open confrontation between the Kingdom of Saudi Arabia, Iran, and Yemen. Saudi Arabia claims that its main objective is to appease tensions in Yemen. However, this is not that simple. In fact, Saudi Arabia holds the Houthi movement (also known as the rebels) accountable for the Yemeni crisis. Plus, the Houthis are said to be backed up financially by Iran (which they deny) and are designated as a terrorist organization by Riyadh. This situation intends to rekindle the conflict between The Islamic Republic of Iran and the biggest Saudi ally, the United States.

This Middle-East is one more time witnessing a terrible conflict where war crimes are condemned by the United Nations Human Rights Council. Terror attacks are frequently reported, from both sides, killing numerous people.

Because of this, civilians are dying every day from the abovementioned attacks, and especially due to an alarming famine. Indeed, according to the NPO Save the Children, “more than 5 million children are directly threatened by Yemeni famine.” This crisis, which is getting bigger and bigger every day, leaves world organizations helpless and unworthy.

Brazil is electing its new president and it is the subject of fierce contestations. Jair Bolsonaro, the 63-year-old candidate for the far-right Social Liberal Party is currently the presidential front-runner. Often compared to Donald Trump, Bolsonaro, got people talking about him. In fact, he is frightening the country by focusing on fears. One of his objectives is to arm as many Brazilian as possible. He is also, developing a strict policy regarding “traditional values” by threatening homosexuals and non-white people. Last but not least, he has been condemned for having sexist words in 2003 against the Congresswoman Maria do Rosario, “I would never rape you because you don’t deserve it.”

His ascension is leading to harsh contestations throughout Brazil: Jair Bolsonaro was stabbed during a rally. The attacker, Adelio Bispo de Oliveira, had apparently received this order from god. Once more, the American continent is endangered by presidential elections.

An alarming situation in Europe

As the migrant crisis is getting more and more worrying, EU finds itself in an awkward position. Instead of working together, the EU is facing divergent views. More than ever, the nationalism is at the heart of the debates. Skepticism is growing, “Italy won’t remain slaves of eurozone” says Mario Borghezio, member of the European Parliament and politician of the Northern League. The situation is also critic in Hungary. In fact, Viktor Orban (the Hungarian prime minister), is being condemned for deciding Hungary not to be a “country of migrants” by building walls to stop migratory movements, and for promoting freedom-destroying law. The European parliament chose to trigger the famous article 7, which aims to suspend the right to vote of a particular country. It is good to note that it is the first time that this article is being implemented since the creation of the EU in 1957.  However, this decision is not playing in favor of the European unity. Indeed, this repressive resolution and the Brexit could inspire other countries to leave the Union and enclave themselves into a nationalist policy.

Business Insider France. 2018. The Chinese military has a big and glaring weakness, and it’s turning to Russia to fix it during massive war games. [ONLINE] Available at: http://www.businessinsider.fr/us/china-turns-to-russia-to-fix-big-military-weakness-during-war-games-2018-9. [Accessed 07 October 2018].